[Numbers in square brackets refer to posts listed on the right at the Home/Archives page.]

On that fateful summer day in 2004, many hours after the biopsy operation on my spinal cord tumour [01], I first woke from anaesthetics in the evening but only briefly; still sleepy. Vaguely, I noticed my younger sister and my two friends standing at the end of the bed but I could hardly breathe or talk. In my half asleep state, I felt tightness around my lower chest wall, especially on the left, as if someone had wrapped it around with a heavy metal band.

Ouch…..!  Ouch….!
Where has this broad metal band come from —
Wrapping tightly around my lower chest wall, tying me to the bed?
Who has put it there? Why?

I fell asleep after speaking to my sister and two friends, with difficulty and only briefly. As I was falling asleep, I felt my legs becoming heavier and heavier. I was later woken by a nurse (M) who apparently had been turning me every hour or so while I slept. Later in the night, I told him that I could not move my legs; I could not feel my left leg; but my right leg was very painful. He told me that he would report it to the neurosurgeon. Later, another nurse (senior) came in to give me, or to increase the dosage of the intravenous desthemetisone (an anti-swelling steroid), and she told me about it. I asked for the time; it was about 10 p.m. I continued to sleep and felt being turned over a few times throughout the night.

When I finally woke up fully, it must be morning: there was bright sunlight outside the window and I heard trolleys being pushed along the corridor.  I found myself in a single room (in a surgical ward), facing a blank wall with no clock. I still felt a tight painful grip around my lower chest wall.  When I tried to turn to lie on my left to relieve the acute pain in the right buttock, I noticed my lower body did not move! I still could not move my legs!  When I touched my left leg, I could not feel anything! In sharp contrast, when I touched my right leg, I felt such  excruciating pain!  All my right side, from both the lower chest wall and lower back down to the toes was extremely hypersensitive to touch!

My Legs: Identical Twins No More [03]

Drastically, overnight,
my two legs have stopped being identical twins.
They have stopped talking to each other.
Right leg extremely hypersensitive to touch:
millions of sharp needles
pricking at my sensitive nerves.
Left leg completely numb to touch.

In addition,I felt severe pains and strange sensations in my whole lower body that I had never experienced before: there were ‘constant activities’ inside both legs and buttocks:

Many long strings of fire crackers
bursting and burning
rapidly but incessantly
up and down, inside my legs,
from toes to buttocks,
making crackling sounds
I cannot hear;
giving out hot bright sparks
I cannot see.

I treated these completely unusual pains and symptoms as post-operative and believed that they were only temporary. I remembered back in 1989, a right-knee arthroscopy left me with temporary discomfort in my right leg for about a week, especially my calf: stiff, heavy, as if I had been standing on my feet from morning to night without resting, which were relieved by gliding the knee up and down while in lying or sitting position. However, these pains and sensations I was experiencing now were completely different.

I would never have imagined that these conditions would be permanent, and that I would become a permanent wheelchair user and a permanent sufferer of chronic, acute neuropathic pain for the rest of my life, as a result of a ‘simple’ biopsy operation on my spinal cord tumour [01], performed by an eager neurosurgeon.

Many long hours after the biopsy surgery,
I wake from anaesthetics—
my entire body wrapped in strange new pain:

My lower body crackles, crunches
and bursts with sensation—
if only I could stop them.

My two legs have stopped being identical twins:
right leg is hypersensitive to the gentlest touch;
the left is completely numb.
. 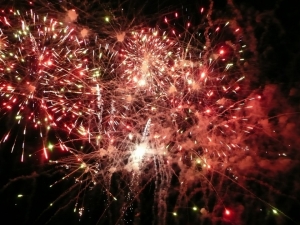 An example of a person in Pinel restraints, by James Heilman, MD, 2017.This file is licensed under the Creative Commons Attribution-Share Alike 4.0 International license. At https://commons.wikimedia.org/wiki/File:PinelRestaint.jpg

Firecrackers in action in Chinese New Year celebration. Photo by Dr. LEE Sao Bing, who is the Medical Director and Principal Surgeon of Shinagawa LASIK & Eye Centre, Singapore. Photo taken from his personal blog at:  https://drleesb.wordpress.com/2012/01/24/firecrackers-new-year/

Bonfire. Photo from English Wikipedia, 8 September 2004 by Fir0002. This file is liscensed under CC AS-A 3.0Unported License.  At http://commons.wikimedia.org/wiki/File:Bonfire4.jpg